'The best Sega Fanboy video ever. Recorded in 1992'


I've just today been emailed over this huge 2 hour archive of Sega footage from UK TV in 1992, recorded on video back in the day and compiled now 20 years later by Youtube user DodgyKebaab. He wrote:

Hello, I used to be a huge Sega Fanboy back in the early 90's and I used to make VHS tapes of anything Sega related that I saw on TV.  Video game shows, TV adverts, promo tapes I managed to get my hands on, etc. All the footage is from British TV because that's where I live, anyway you can see the whole 2 hours worth of Sega rare footage here.

Included is clips from TV shows like Gamesmaster, Bad Influence and High Five, an ITV news report about the lanuch of Sonic 2, Chris Evans and the puppets Zig and Zag on the Big Breakfast show talking about the Mega CD and other games, promotional videos of games (one of which I recall owning), an episode of Adventures of Sonic and more. It's quite a mess, some adverts are featured several times in a row, and some are of Lego and other things, but well worth watching.

This right here is my childhood. List of highlights after the jump.

0:00:00 - Gamesmaster shows people who beat Sonic 2 the soonest after release.
0:00:57 - Gamesmaster Sonic 1 challenge, then a Sonic 2 special stage one (with a Bubsy advert in between)
0:05:29 - a Midland Bank credit card commercial with Mega Drive games in it, and a Road Rash II ad.
0:05:59 - Big Breakfast gaming segment, talking about the Mega CD. Includes classic collection, Wolfchild and Jaguar XJ220.
0:10:43 - The Cyber Razor cut commercial and Sonic 2 beta footage from a promotional video I remember having from one of the many Sega mags at the time.
0:23:15 - ITV news reporting the launch of Sonic 2. You see Hamleys gaming floor back when sega had a dedicated area in there, with staff wearing the Sonic blue jacket, and the Sonic 2 cardboard display both of which I own.
0:25:55 - Big Breakfast show off Aladdin. Notice the whole rooms wallpaper is Labyrinth Zone!
0:28:59 - Bad Influence shows the Mega CD off, including a karaoke add on that's not official. After that some kids review Shinobi III....badly.
0:30:57 - Gamesmaster slag off Sonic CD. The special stages a rip off of Mario Kart, what, because of the floor?
0:32:06 - The Pirate TV mega CD commercial, which is here about 4 times! Also a Pirate TV ad for a sale of Mega Drive games at long gone store Ritz.
0:34:13 - Zig and Zag (Big Breakfast puppets) talk about Ecco! After some more repeated pirate TV ads it goes back to Zig and Zag talking about Boxing games with guest star boxers! Craig Charles also shows up to check out street Fighter II on mega Drive and there is a Gamesmaster Jungle Book challenge.
0:41:11 - Pirate TV Street Fighter II commercial. Also Street Fighter toys...and some Lego? 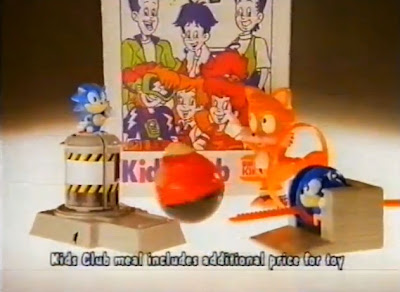 0:43:03 - Commercial for the Sonic Burger King set. I only have one of these toys now :(
0: 43:22 - Big Breakfast footage, judging from the music, must be a beta version of Sonic Spinball (a month before UK release). After that they look at James Pond 3.
0:44:18 - Channel 4 commercial for Adventures of Sonic the Hedgehog.
0:46:35 - A Sugar Puffs Commercial for some kind of Master System promotion! Scratch off books based on various Master System games. Fuller version at
0:47:07 - Bad Influence review Thunderhawk on Mega CD.
1:09:37 - Bad Influence review the make my Video games. haha it was even considered as rubbish then.
1:10:38 - A gameplay challenge of Batman Returns on Mega CD.
1:12:36 - Big Breakfast shows Jurassic Park on Mega Drive (again an early build) followed by Jungle Strike.
1:16:35 - Big Breakfast: Jungle Book and Road Runner on Game Gear. Sega wired up the Game Gear to a TV just for them, awww!
1:17:48 - Now bad Influence review Jungle Book on Game Gear, followed by Cosmic Spacehead.
1:20: 39 - Gamesmaster Bubsy challenge.
1:22:43 - Gamesmaster review the first Fifa game, on Mega Drive.
1:23:03 - Fecking bonkers (and expensive looking) Mega Drive II commercial, with... 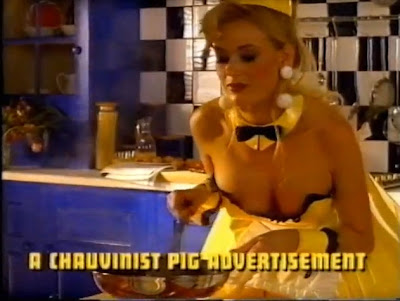 ...wow.
1:23:52 - Gamesmaster Sonic 2 tip: "It's not the animals you want to be collecting, it's the rings" "Thanks Gamesmaster!" followed by a Jungle Strike challenge.
1:26:11 - Sonic custome guy on Children in Need! Also better version of that Suger Puffs ad.
1:27:35 - Bad Influence on rubbish mega CD game Microcosm. 4 out of 5? hahaha what. After that Sensible soccer vs Fifa. Gamesmaster review of Sensible Soccer, then back to Fifa with Vinny Jones haha!
1:32:36 - Commercial for the Telstar Sega game double packs. Hang on what is Mr. Blobby doing on here ahhhhhhhh.
1:36:38 - Toejam and Earl Panic and mean Bean Machine on Funkotron on Big Breakfast, with Terry Wogan sounded very uninterested!
1:40:33 - Pirate TV Aladdin Commercial. Bonkers as always. 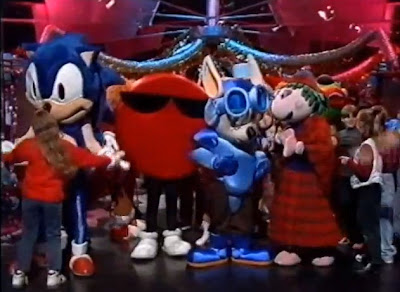 This is so awesome on so many levels!!! :D
Thanks for sharing!