Another Sonic Generations Statue is Coming, This Time from Jazwares 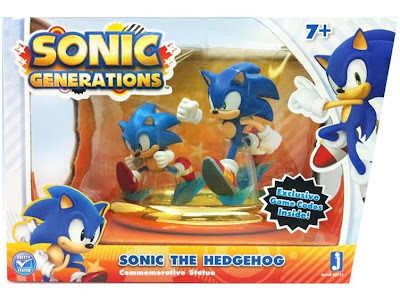 Thought the Wii charger, the Collector's Edition, the First4Figures exclusive and the Japanese arcade prize were the only Sonic Generations statues we'd be seeing? Jazwares says "think again". Due to arrive the first quarter of 2012 is another statue featuring classic and modern Sonic, only this time the two aren't standing around. Instead, they're running side by side much like they do in the game's teaser trailer and box art. Note the "exclusive game codes", I'll best they're statue codes for the statue room in Generations. The big ring is very shiny, I hope the final figure released has that shine to the ring. At first I thought the blue bits under their feet was water, but I'll bet they're trying to depict that blue energy that Sonic creates when he boosts.

Unlike past figures, this one will be quite easy to find. In fact, fans can pre-order it for only $21.99 over at BigBadToyStore.com (retail price is $24.99). They even ship internationally, for those fans who don't trust their home country to offer the statue. I'd assume other stores, like Gamestop and Toys R Us will carry it come next year.
Posted by Barry the Nomad

Oh man shame this isn't going to be out this month: my parents are going to be in America from next week and are gonna bring me back some of the Toys R us exclusives. :)

Cool that your parents are getting some TRU exclusives! Which ones are you still looking for? Classic Eggman?

Yeah, classic Eggaman, the super sonic pair, the amy and sonic comic pack mainly, and also the flocked one if they can find it! :)