Summer of Sonic is imminent!

Summer of Sonic kicks off in The Pavilion, Shepherd's Bush, London this Saturday and you can expect to see coverage of the event throughout next week (providing I get time as I'm currently rather busy for this and next week) including plenty of photos and videos. For those not in the know, here's some of the excellent stuff to expect: 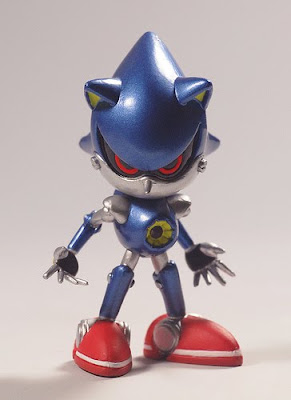 Free Metal Sonic Toy!
Last year the freebie as we got in the door was a neat little Sonic art book, but this year they have really outdone themselves. The first 750 entrees with a ticket will be getting this yet to be released mini Metal Sonic figure from First4Figures! This is one of the three new 3" toys they will be releasing later this year to sit along side the Sonic, Knuckles and Tails ones they made last year. There will also be a box set of all six in the near future if you have not picked up the others yet. The other two new figurines consist of Super Sonic and Amy Rose! 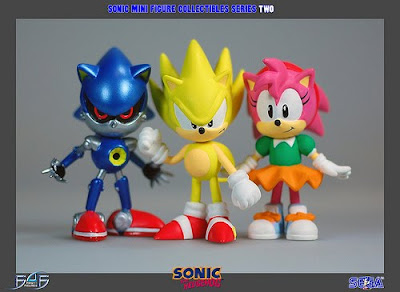 Sonic 4 and Sonic Colours (Wii and DS) Playable!
Yep, not one but all three of the currently known upcoming Sonic releases will be there to test out! This includes the much awaited (and debated) Sonic 4 and both the DS and Wii versions of Sonic Colours, the next in the main line 3D Sonic games. I'm personally looking forward to trying both out: Colours looks like it's taking everything that worked in Unleashed and ditching all the annoying stuff to give us a simple fun new Sonic with no werehogs, no medal collecting and no need to endlessly boost everywhere! The DS version appears so far to be essentially Sonic Rush 3. Sonic 4 is well, Sonic the Hedgehog Number 4.
All-Stars Racing Tournament!
All-Stars was playable in an early form last year at SOS and since then the game has been released (and was awesome btw) and this year you can see if you can be hailed the All-Stars racing champion! I bet most people will be playing Alex Kidd, Ryo, Shadow....bascilly anyone on bikes. We shall see!
Crush 40 Performing!
Jun Senoue and his band are one of the major players in Sonic's musical history, producing the soundtracks to a large portion of the franchises existence, and at SOS this year we will get to hear them live, ask them questions in an interview and even a instrumental jam session with Jun at tea time! For me at least this sure beats seeing that Bentley Jones guy performing, who I'm not a fan of by any means (I'm trying to be polite here lol). 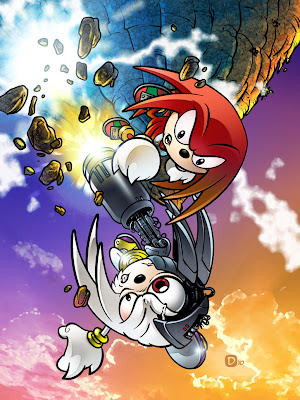 Nigel Dobbyn returns!
One of the leading artists from the UK Sonic the Comic, Dobbyn was at SOS last year selling many of his original artwork. Unsurprisingly most if not all of it sold out, so this year he will be selling newly drawn prints like this little beauty here (above)! He will be there like last year for a chat and to get whatever you like signed. The guy is a mega talented artist so even if you never read the comic you should check him out! 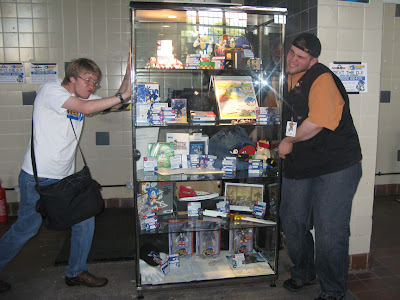 That (in my opinion) the highlights for this year, and there is bound to be more surprises too so if you're going to be there I might see you there (just look for this git on the left, above) and if not look forward to checking out our coverage! :)
Posted by Animated AF

I have to admit, I'm a bit jealous. Here's hoping that six pack of figures reaches the US someday. Also, a chance to play Sonic 4 and Colorz would be a real treat.

Have fun and looking forward to your report!

Hey! Just so you know i'm the guy you met on the tube yesterday after summer of sonic! Sorry i didnt chat more i clearly have social issues and i also never said i read your blog because of this! But i do just so you know :p

it was an epic event man! made a VLOG on the event myself ^^