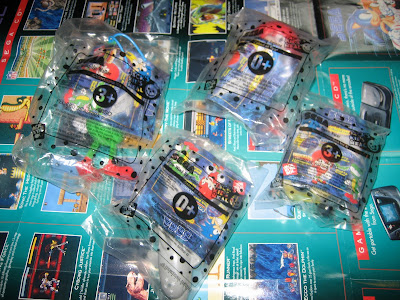 Back in 1999, when you thought "SEGA" you inevitably thought "Dreamcast". With the impending September launch, Dream-hype was seen anywhere and everywhere... except at the Califronia based fast-food chain Jack in the Box. Jack in the Box, oddly enough, had featured a SEGA Kid's Meal in 1999 that focused on SEGA's PC games. Guess they didn't get the memo.

The promotion was actually rather cool. Kids could not only get toys representing SEGA's PC games, but could also purchase the PC games themselves from the restaurant. 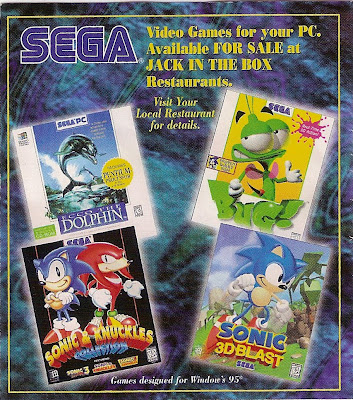 Reportedly, the games were $1.99 each when bought with a kids meal and $5.99 each when bought separately. The games were packaged separate from the toys and food, so no fear of getting french fry grease on your copy of Bug!. Well I never lived in any part of the great American West, through the wonders of the internet I was able to learn of these and purchase them via ebay. I found the lot for $10, so I didn't feel bad stripping them of their mint in package status. 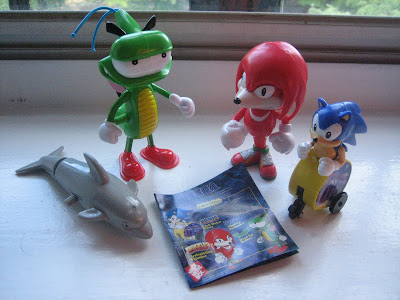 Here they all are free of their plastic baggy prisons. Really an odd assortment aren't they? You've got a massive Bug, a medium Knuckles, a tiny Sonic and a baby-sized Ecco.

I was surprised to find that Bug (I'm dropping the exclamation mark from his name) was the best of the lot, especially considering he is the worst character of the four. All the little details are perfect and the distinct 90's character design brings back memories of when every cartoon character wore sunglasses, smirked and were expert skateboarders. He even winds up and does a little strut. 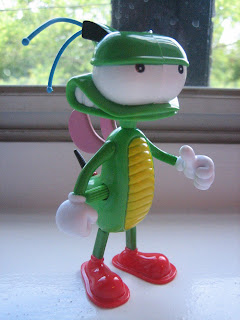 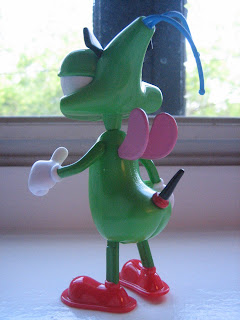 Next we have Sonic, which seems to have had his legs amputated in favor of some sort of electric scooter. I can see what they were going for, an attempt at the famous "wheel of feet", but it fails when they introduce yellow and that bizarre sticker. 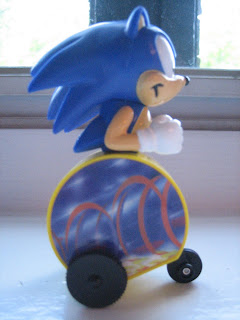 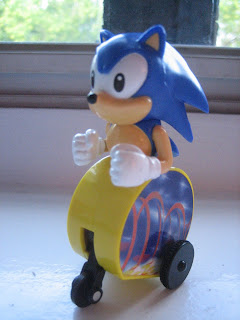 It may look like a hologram, but it isn't. What you see is what it is. Despite the goofy build, the figure has a rather fun mechanism in which you push down on his head, causing the front wheel to wind up and propel Sonic foreward. My cat loves it. Let's move on to Knuckles: 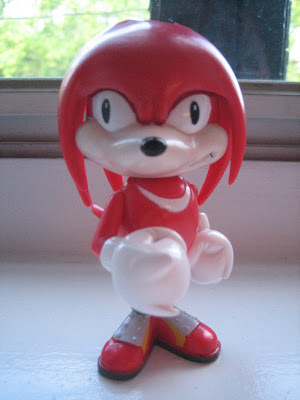 DERP! DERP!
Good lord! Knuckles, what happened to you? With his derpy face and lack of any movement aside from a swivel head and arms, wall-eyed Knux is the worst of the bunch. Despite that, I did find some good in him: 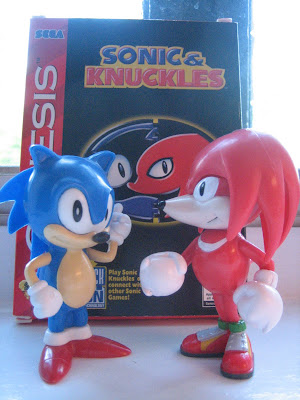 Knuckles is almost the exact same scale as the 1993 Sonic candy dispenser! So if I turn Knuckles head for a much improved profile view, and place him next to Sonic, he gains display shelf status. 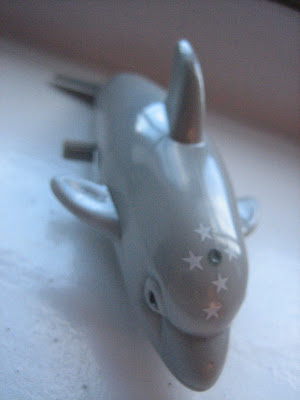 Why it's Ecco! While Ecco isn't too unique of a figure aside from the stars on his head, it's cool to finally have him in figure form. I'm actually quite surprised SEGA hasn't released more Ecco toys, considering any dolphin toy already produced sould be reappropriated by placing five stars on the item's head. Random dolphin plush toy + five stars = awesome Ecco plush toy! See? Simple.

Well, that's all I have to say about SEGA PC Jack in the Box toys. Ryo, take him to the tuna factory! 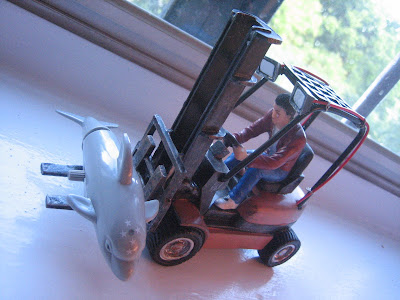 Oh hey I've heard about these, I think I saw them in someones collection photos once. Wasn't aware they were made in 1999 though, that's odd! There was a set over here in Burger King advertising the PC version of Sonic R in mid-98 as well, I guess Sega's PC games sell pretty well.

LOL is this the only Bug and Ecco toy in existence?

Ha! Y'know, now that I think about it I'll bet they are. I've never seen another Ecco toy and I'm sure Bug was never popular enough for any other figures.