Jazwares has finally shipped the first wave of Sonic the Hedgehog 20th Anniversary figures to stores! I feel like we've been talking about this line forever. Since February, we here at SEGA Memories have been eagerly anticipating this action figure line that promised characters (and enemies) from Sonic's twenty year history. Details were spotty, but thanks to convention photos we were able to piece together what would be the collection. Now that the first wave has hit, and details have leaked about the second wave, we know what figures are out there and what to expect. 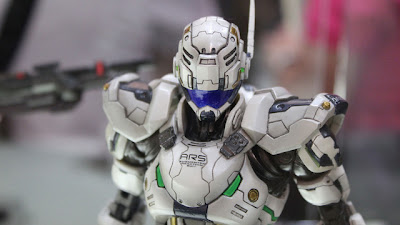 I had always thought that Square Enix only churned out Final Fantasy action figures. But apparently they do more than just Cloud and Yuffie, they also have produced stunning figures of characters from Metal Gear Solid, Batman: Arkham Asylum and even SEGA's own Vanquish. Revealed at Comic Con is this amazingly detailed Sam Gideon. I mean, just LOOK at that thing! Makes my Ninja Turtles and Ghostbusters figures of the 90's look like crap by comparison. Of course, with great details and articulation comes a great price: figures in the Play Arts Kai line retail for around $40-$50. Thats more than I spent on my copy of Vanquish! Of course, the figure looks great, so I could easily see the price being justified. Just think of it as a statue and the $50 doesn't seem so bad.

At the moment the figure has yet to go on sale, nor have I been able to find a pre-order link, so consider these to be a first look only at the moment. 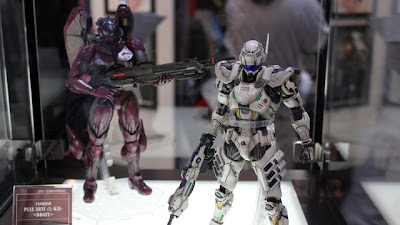 Posted by Barry the Nomad No comments: 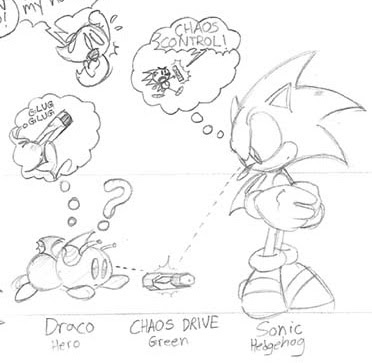 Digging through my old image files, I came across these remnants of Sonic fandom past: my old Sonic Adventure 2 chao fan comic "Chao Fan World". Dated August 20th, 2001, these Sonic Adventure 2 inspired comics began when I frequented the forums at The Sonic Foundation . As forum members began to raise their chao, they shared photos and drawings of their weird creations. Thanks to SA2's hero/dark theme, players were able to raise some pretty crazy looking chao. From angels and rabbits with pumpkin heads to legless bat creatures with skull heads. At the time, I had wanted to create a Sonic fan comic, but wanted to create something a bit more offbeat. So, I ignored the main characters of the Sonic universe and instead focused on the chao. After putting out a call for forum members to share their chao, I put together a short lived fan comic called "Chao Fan World".

After the break, check out the four episodes of the comic along with a comic cast page!

Read More...
Posted by Barry the Nomad No comments:

Here's the last of the footage I took on the day. My camcorder batteries ran out so I couldn't get as much as i would have liked but still. here you will see us joining the signing queue for Yuji Naka and Takashi Iizuka, of which we got to watch Never Mind the Buzz Bombers while in it. There is also footage of Frobman Sonic Heroes animation (watch the whole thing here) which I took so he could have video of how well it went down. Finally there some footage of the second Q&A session with Naka, Iizuka and Senour followed by a bit of the birthday cheer that was recorded for Sonic Generations. Enjoy!

Summer of Sonic 2011 - The Cosplay Contest

So here is (most) of the cosplay contest in a huge 22 minute video! I didn't get all of it because one of my camcorder batteries ran out half way through and at one point I thought I was recording and it turns out I wasn't, oops! Either way you can see most of the people that went up on stage to compete for the prize of the 20th Anniversary statue, including quite a few of my mates dressed up as Eggman Nega, Tails and Professor Pickle! The contest was on quite early in the day compared to previous years (about 2:30 in the afternoon) so i think a few cosplayers didn't make it in time to the contest, and there were many others that didn't go up on stage like Ulala and the SegaGaga guy. One more short video to go, coming soon!
Posted by Animated AF 2 comments: 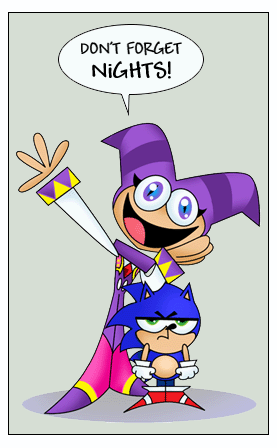 Funny how NiGHTS anniversary is so close to Sonic's really: only 5 years and 11 days between them. Both were the defining games for their respective Sega consoles though while one went on to become one of the biggest franchises in the industry the other has barely been seen of in it's entire existence with only two games (and Christmas NiGHTS which was sort of an expansion to the original) under it's belt, yet NiGHTS continues to have a large passionate fan base.NiGHTS had quite a big presence at Summer of Sonic which I would like to think pleased Yuji Naka and co greatly.

Now would be a great time to join in on the NiGHTS 15th Anniversary campaign if you haven't already, in the hopes that Sega may be convinced into porting the original Saturn game to the downloadable serviced. All you have to do is click button, simples! Also check out this interview with Naka and Iizuka over at nightsintodreams.com and this old Sega Memories article about a cute toy of the character I own!

UPDATE: As promised the OC Remix NiGHTS album was released today, go download it for free here! Also, Sega is asking on facebook if people would like to see NiGHTS re-released and where, so now is the time to be heard!
Posted by Animated AF 2 comments:

As we walk in I check out the merchandise stands just as Naka, Iizuka and Senoue took the stage for a Q&A (the first of two they did on the day), plus I have a quick chat with the Sonic the Comic Online guys and some cosplayers. You'll also get to see some karaoke including Darren Indeed from Sega Shiro's friend Daryl singing quite possibly the most miscellaneous Sonic song they could have picked! Plus there was an awesome Sonic the Comic inspired animation, which you can see in it entirely on Youtube here.

The next video will be the cosplay competition!
Posted by Animated AF No comments: