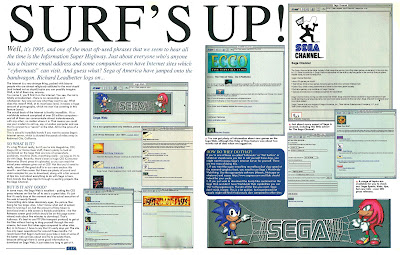 Here's another neat article found in the official UK Sega magazine, from issue 15 (March 1995) featuring Sega of America's website at the time! Would you look at that! I thought this would be an interesting thing to put up as there is no way to access far back anymore: the Way back machine can go as far back as late 1996 but even that site was no where near as basic as this! Look at all that stock clip art and flame text! I also quite dig the pixel art of Sonic and Knuckles with the Sega logo surrounded by a web. Get it? Because it's a WEB site? Oh boy.

What's more Richard Leadbetter sums up the Internet in a way that shows that it really hasn't changed much at all! He also complains that the site was really quite slow compared to other websites at the time, but also states that the site has only been online for around three months. Does that mean this is the first ever revision of the official Sega website? Haha, wow.
Posted by The GagaMan(n)

A NETWORK COMPRISED OF OVER 20 MILLION COMPUTERS

I think one of my earliest Internet experiences was waiting for Sonic 3D screenshots to download from the Sega website, circa 1997. That lead me to The Sonic Foundation - is the forum for that site still going?

Looks like it's still up, though doesn't appear anyone has posted there for around a year.

Incidentally, that feature's writer Richard Leadbetter is currently editor of the Digital Foundry section of Eurogamer, which mostly does insanely detailed technical analyses of the differences between the 360 and PS3 versions of games, with framerate graphs of 720p vs 1080p performance. The technical details discussed in his articles can get worryingly specific at times.

I have a couple of issues of the Official Sega Magazine, but not that one - nice to know that he was still doing tech-focused articles even back then!

Oh that's cool, I was wondering what the Sega mag writers have been up to since.

If you like, you can check out the archives of sega's old web sites from 1996 to now.

I love what you do with this blog, been coming here for years and hopefully more to come.