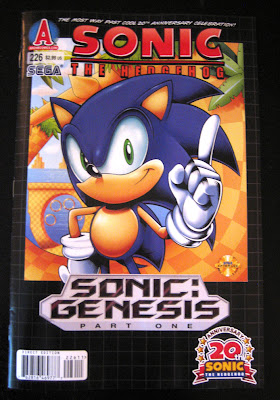 Just a day until Sonic's 20th, and this arrives in the mail: Archie's Sonic the Hedgehog #226. This issue is better known as being part one of the hotly anticipated Genesis saga, which throws the main cast of the Archie continuity back into the SEGA Genesis days of Sonic. In the previous issue, #225, the Eggman of the Archie continuity (who looks like the modern Eggman of the games but has a back story so complicated I've yet to wrap my head around it) unleashed a resurrected Death Egg on the Freedom Fighters. After a bit of fighting, Eggman killed a well known character from the SatAM days and powered up a device that enveloped the universe in white (hmm, sounds like something that is happening in Sonic Generations) and rebooted the entire universe. As such, when issue 226 kicks off Sonic is acting as though he is from the Genesis era (with a modern design), running through Green Hill and bopping badniks which he seems to be encountering for the first time. 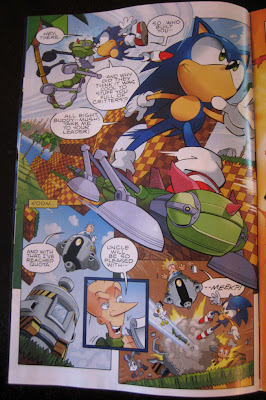 The staff of Archie have yet to reveal if this reboot is permanent, or if we are to expect a more SEGA Sonic video game world inhabited by both the game characters and SatAM characters who have been stripped of more than two hundred pages of back story. When Sally, Boomer (Rotor's original name in the Archie comics) and Antoine appear in the issue, they act and look like their earliest counterparts as seen in the cartoons and first twenty issues of the comics. Could this be Archie's goal? Personally, I would love a Sonic comic more rooted in the game world, but would welcome the SatAM characters returning in their original less complicated forms.

Even Snively appears in the issue, though this time he refers to himself as Dr. Eggman's nephew. No longer the nephew of the overly complicated Dr. Ivo Robotnik. Seriously, not to rag on the old Archie comics, but Robotnik was a human named Kintobor who was corrupted and then became Robotnik and then died and then was replaced by an alternate universe Robo-Robotnik who took over and then was destroyed and then downloaded his consciousness into a robot body that looked like modern Eggman and then was de-roboticized and became human. Ugh! I'd much prefer an Eggman who was born a human and simply does what he does because he wants to create his own robotic paradise. Thankfully thats what the Genesis saga gives us and I hope it sticks. Even better, the comic gives us Eggman in his classic costume! Way past cool! 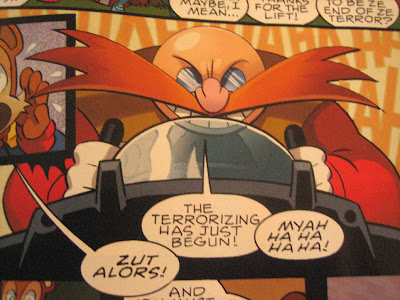 All this talk about continuity and I forgot to mention the great art of Patrick Spaziante. Spaz is known best for his many cover art contributions to the series, though he has also done an occasional story and was the artist behind the NiGHTS into Dreams mini-series which I covered over at the Saturn Junkyard. Spaz does an awesome job on pencils and nails the classic badniks and environments. 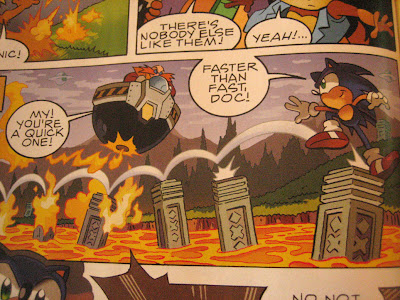 The comic moves from Green Hill to Marble Zone, skips Spring Yard and concludes at Labyrinth Zone. The next issue hints at the arrival of Tails and based on interviews, the series will cover the first two Sonic games. Overall, I found Genesis part one to be a breath of fresh air! As somebody who got out of the comics due to them being overcomplicated and relying too much on SatAM characters and locations, I was happy to see game environments and simplified characters. That isn't to say that I don't enjoy deep characterization, but I'd prefer a fresh start and would like to see characters like Sonic, Tails and Eggman develop in a fresh continuity. Here's hoping part two is even better than the first, and that Archie sticks with this plan. I'd hate to see issue #230 tell us that it was all a dream. 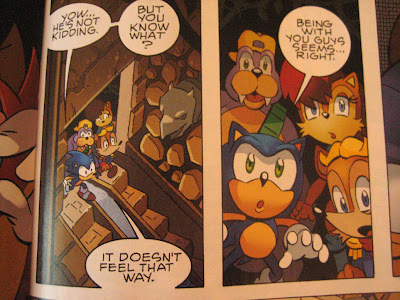 The Archie continuity has it's warts, but any long running, 16+ year long continuity will, at least one that has to bend over backwards for a licensing entity like SEGA. Ian Flynn has done a lot to clean up the messy continuity and get it to a place where things like Robotnik's overly complicated past simply doesn't matter.

It'd be a shame to see the old continuity go, one that has been around for awhile and still has plenty of stories to tell. Thankfully, this reboot is supposed to be only temporary, and while it will have it's changes this ISN'T the new continuity. This is something being done especially for the anniversary.

Yo nuckles guy this is not Archie, you are talkin bout the wrong comic brah. This is the Sonic the Hedgehog comic. The Sonic continuity. There is only one.

Hey stupid the comic IS WRITTEN by archie comics dumbass