Hey, more photos of the previously revealed Jazwares Sonic 20th Anniversary action figure line! This time, Jazwares had mock ups of the packaging on display at Spielwarenmesse 2011, a German toy expo that took place last week. Revealed are a number of new hero/badnik packs including: a 90's Sonic and Amy comic book 2-pack, 1992 Tails with Sonic 2's Grabber, 2000 Shadow with a G.U.N. robot, 1994 Knuckles with a badnik (temporary photo shows 2003 Knuckles with an Egg Pawn), the previously seen 2010 Tails with Sandworm from Sonic Colors, 1991 Sonic with Sonic 1's Moto Bug, 2008 Sonic with Sonic Unleashed's Spinner robot and Silver with a fire monster dog thing from Sonic 2006. You can also see the previously revealed Eggman and Robotnik packs, the 10 inch Sonic figure repack plus an obscured Sonic combo pack (probably combining all the "Sonic Through The Years" figures).

After the break, check out the consoles photos, courtesy of spindash.de! And make sure to check out their original post for more photos of already released figures and a lot of German text. 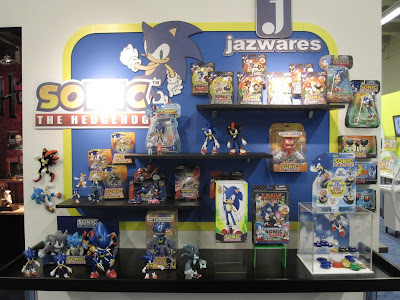 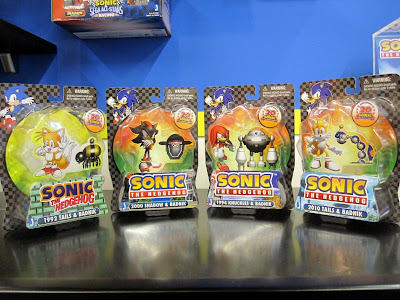 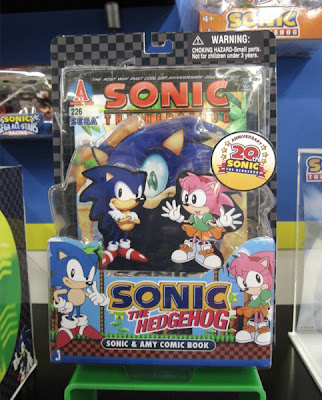 So it looks like we can expect a full set of the '90's era main cast (awesome) as well as repacks of the 2000 era main cast (pretty cool, but the robots and badniks that make them even cooler).

Ha! I already bought a new wall shelf today in anticipation for these.

UPDATE: New York Toy Fair photos can be found here: http://toyfair2011.figures.com/showgallery.php?cat=545&page=1
Nothing new really, however the photos are of much higher quality. Thanks to the pics, I've been able to detail the 3.5" line. What follows are the featured game followed by the figures representing the game. Looks like Jazwares is covering every main series game:
Thanks to The Sonic Stadium for giving us a shout out!
Posted by Barry the Nomad