If you encounter anybody with bloodshot sleep-deprived eyes today, chances are they're a Dreamcast fan coming off of last nights festivities. Yesterday was a wonderful mix of Dreamcast tribute videos, top games lists, historical articles and memories. As we here at SEGA memories are all about remembering the good old days, I thought I'd share a few memories found at SEGA Nerds as well as share a report on my own 10th anniversary festivities.

I downloaded all of the commercials for the console I could find (on dial-up, no less), and watched them all at least a million times. When I would find kiosks of the console I would go to the store on a weekend and literally play it all day, believe it or not the stores would allow this!
-SEGA Uranus

Prior to the system’s release I was heavily involved on Sega.com and their message boards. I actually won a contest in which I won a Dreamcast shirt and other cool memorabilia.
-Segamon

That legendary QTE in Shenmue II at a barber shop. I was mesmerized when I figured it out. Also, I ditched a girl to play the game. I may have mentioned this here before. haha
-ORTA 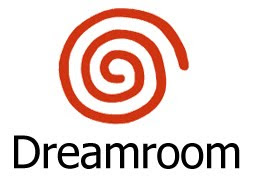 My 9-9-09 began with a post at my own SEGA blog announcing The Dreamroom, a ten hour Dreamcast marathon which included streaming video and a gathering of friends. I read and watched every Dreamcast tribute that I could find, including Gagaman's excellent top 100 and IHaveADreamcast's video feed, and then headed home to set up for my own event.

The party room consisted of two Dreamcasts running on an HDTV and good old tube TV. I had my library of 80+ games and controllers at the ready and kicked off the feed with some Sonic Adventure. 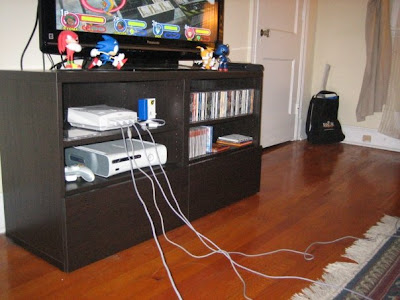 The main stage. The PS2 was rightfully stuck in the back room to make space for the Dreamcast games.

After a playthrough of some Sonic stages, I put on the Shenmue the Movie DVD. While the DVD was included with the XBOX version of Shenmue II and was being played on the 360, the footage itself was captured on a Dreamcast, so it still stayed true to the day. As the movie played, I set up the living room and chatted with Dreamcast fans watching the feed. Props to Justin.TV users Gagaman, Atmeyer, IHaveADreamcast, OatBob and snume for watching and commenting throughout the day! You guys truly made the event. 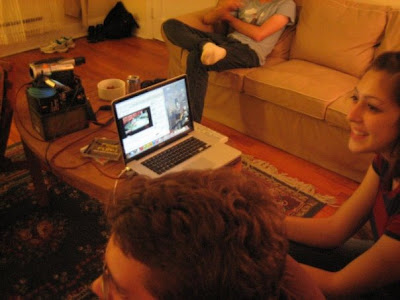 The webcam setup. I acutally ran a DV camera out from my laptop and it worked perfectly.

After the first half of Shenmue the Movie, Gagaman joined the party and things really kicked off! I played through a good amount of Space Channel 5, only to fail at the fourth level. However, Space Michael was rescued and that's all that matters. Tokyo-to was bombed with some custom graffiti in Jet Grind Radio followed by a conversation with Seaman, who was still a cheeky child at the time and could only reply with smartass dismissive remarks. He received a good tickling for being naughty on the webcam and was dubbed a "fat little fish". 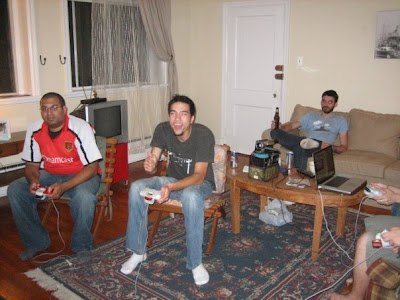 Jason (left) being the true Dreamcast fan he is, came dressed in his Dreamcast football jersey and brought a matching red controller. He won the costume contest.

After feeding the fish, MDK2 was booted up and the less said about that play session the better. Next came a game delievered the day of the party, Rent A Hero No.1! While viewers were dubious as to what was going on, once the intro kicked in we were hooked. The Creamcast startup screen and Segata Sanshiro's cameo were highlights of the day. Gagaman, you MUST do a video of this game. Truly a Dreamcast classic. Er, or is that Creamcast classic?

Part 2 of Shenmue the Movie followed as I ordered pizza and set up some more. Guests Jason and Nick arrived and the multiplayer gaming began. Per Gagaman's request, we played Dynamite Cop 2 on the tube TV, as the VGA box was not compatible with the sheer awesomeness of Bruno Delinger. More guests arrived, Scott and Isabel, and we were really cooking! Ten rounds of Power Stone 2 and some Soul Calibur put our skills to the test. 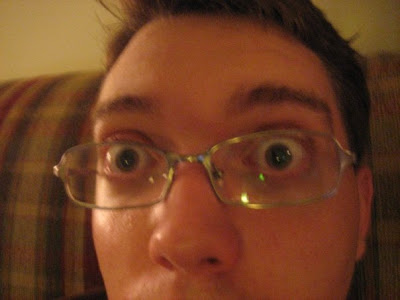 Ten rounds of Power Stone 2 will do this to you.


The party dipped its collective toes into the weird as we played through Yukawa Senmu No Otakara Sagashi and What's Shenmue?, both Japanese giveaway games that featured SEGA's then-Executive Director Eiichi Yukawa. Digging up Dreamcast treasures was a joy, just watch:


Watch live video from Dreamroom on Justin.tv
As the party wound down, we returned to Seaman via the magic of time travel. Pushing the internal clock ahead a day, seaman was now an adult. Speaking in his famous voice, he queried my birthday and whether I was male or female. More fish tickling ensued and Nick and Jason bowed out (I'd leave a party too if it resorted to fish tickling). Before our last two guests left, the maracas came out and it was samba time. Samba de Amigo Ver. 2000 time to be exact! 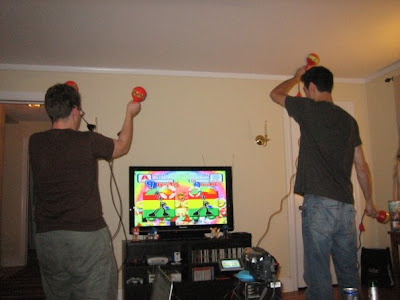 With the guests gone, the Dreamcast shutoff and the web stream concluded I realized that there was a LOAD of Dreamcast games that we had yet to play! Despite having a good ten hours, classic 2D fighters, a number of racers, Sonic Adventure 2, Shenmue 2, Rez, Bangai-O, Tokyo Bus Guide, Cool Cool Toon, Segagaga and many more had yet to be played! Just a testament to how strong the Dreamcast library is. 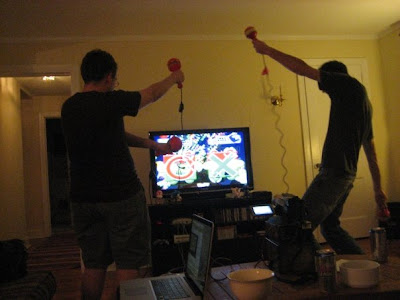 
Special thanks to my girlfriend Marlena for taking photos. :)

Yeah it's funny you'd think after all our marathons/streams we'd have played every great Dreamcast game.

But during the 24 hour marathon, the cd release stream, and over 12 hours of gaming on 09.09.09 we still mostly focus on the same 10 or so titles. We just can't get enough of them! We want to play the other games, we just never seem to have the time.

It just goes to show how great some of the Dreamcast's games truly are.

Looked fantastic, I did get to see the first couple hours before your mates popped over. I wanna do one of these web stream things one day..