I've been sitting on this article idea since I had it back in the summer, because obviously it makes sense to write about Christmas related Sega merch near the actual time, right? We're not like a TV channel that repeats xmas specials at random times of the year! Either way, while these toys are not particularly Christmassy, they were sold in Christmas crackers here in the UK back in the heydays of early 90s Sonic mania. Take note the palm tree thing in the above photo was just some souvenir from a holiday we had lying about and not part of the set, in case you were wondering. Check out more photos after the break!

Christmas crackers usually have pretty basic gifts inside them: a paper crown hat, a lame joke and if you're lucky a little toy bowling pin set. But then there are the pricier deluxe sets. These were normally based on popular brands and had proper little figures inside as well as other goodies. For some reason they don't do cracker sets quite as nice as this anymore, as even the branded sets only have cheap basic toys in them. As kids it was one of our favorite Christmas treats: one year we had Aladdin ones, the next Lion King, and one year we had this Sonic set. 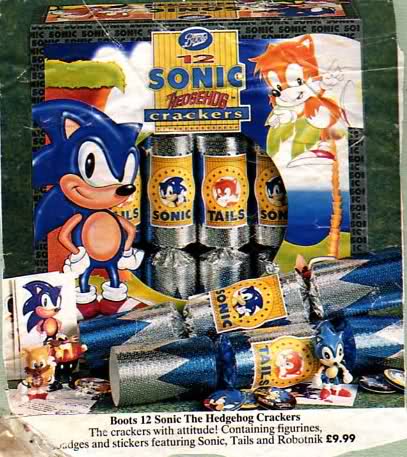 It was sold in Boots for £10 (although taken inflation into account they would more likely be around £15-20 if released today) as you can see from this scan from their catalog that was posted on the Sonic Retro forums  which reminded me of where these figures came from in the first place. Also included were Sonic stickers, which i don't own any of anymore, and badges, some of which I do have. But the real prize of this set were the figures, which as far as I know were only sold in this cracker set.

There were six in all: two designs of Sonic, Tails and Robotnik. My parents reckon we had friends around when these were given out, as in my personal childhood collection I had one of each character left and I lost the Tails one at some point. Recently I acquired the rest of the set so here are the lot. As you can see the different designs are only slight variants.

The two Sonic's main difference is the arms: one with them up and one down. Also one of them has blue arms, and I had two of this one and they were both like that so this might of been a mistake on the whole line, I'm not sure. Saying that it is a really nice little figure of Sonic. It looks more like the Japanese art than most other figures from that time that tried to emulate the extra tude that that gave to western artwork, some of which even had one eye bigger than the other to fake the angle of his face, for some reason. As far as small Sonic figures go only the recent First4Figures mini figure is better really.

Speaking of painting errors the Tails pair have an even more obvious flaw. Where their fur should be white...it's pink! In the catalog photo it shows what I assume are prototypes of these toys and the Tails one has brown fur there instead, so even after a revision they didn't get it right! Ignoring that the toy is a pretty decent cute design, though he also has a pretty weird gob which can either be interpreted as a cute shock on his face or a terrifying inwards lump where his mouth should be. Depends on the angle, I guess. There is barely any difference between the two again, just their arms and tilt of his head.

For me, the Robotink figures are the highlight of the set. These must of been made in that short period before Adventures of Sonic was released, which led to all merch of Robotnik becoming based on that cone headed Milton Knight creation here in the UK (and the SATAM design in America, sometimes but not always). There are barely any toys from the 90s outside of Japan of him in his original game design so these are a real treat. They actually end up being a bit shorter than Sonic and Tails which is odd, but i suppose they had to fit in the crackers so height accuracy went out the window. they got the likeness down very well though. One had his arm up in the air so they kind of look like increasing degrees of anger. here they're having a scrap, because there can only be one Dr. Ivo Robotnik!

(Except there are loads).
Posted by Animated AF

Those are the cutest Tails figures I've ever seen.

Especially in that last picture where he's in the background.

I've been trying to get the robotnik figures for a while now, they usually turn up on ebay in bundles with a bunch of other stuff I either don't want or can't afford.
Fleshy tails pops up quite a lot too but I don't think I've ever seen the sonics before.
Never knew this was where they came from, great article :)

Too bad I had not seen all this these last Christmas, would have had a great gift :)