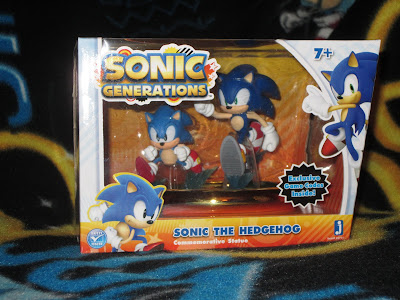 The 2013 Guinness Book of Records Gamer Edition better give Sonic the award for most statues produced for a video game mascot's anniversary. The latest commemorative statue, released by Jazwares in the United States (more territories have yet to be confirmed), may not stack up against the fancy First4Figures release or what was offered in the Sonic Generations Collector's Edition. The scale is smaller than the other statues released and the paint job is typical Jazwares quality. However, there are a lot of good things to say about the statue, and it is a great addition to any Sonic collector's shelf! 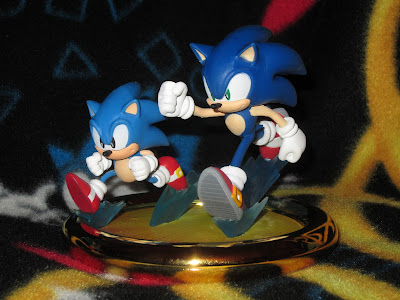 The best aspect of the statue is the pose. Unlike the Japanese arcade prize, the Generations collector's edition statue, the Wii charger and the F4F limited edition statue, Sonic isn't standing around. Jazwares have smartly put classic and modern Sonic in iconic running poses, very much influenced by the game's box art. 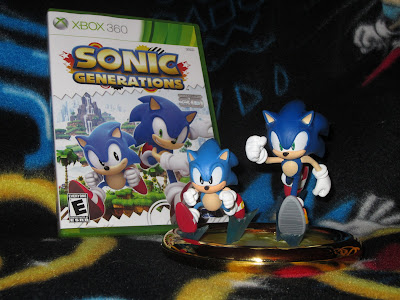 Another great bit is the base. While plastic, the ring is a nice shiny gold. The bit beneath the Sonics appeared to be cardboard in early photos, but it is actually a sticker covering the plastic base. The figures are permanently attached to the base, so they are purely statues. The box says 7+, but really this is just for teenage and adult collectors. Kids aren't going to have any fun with this. 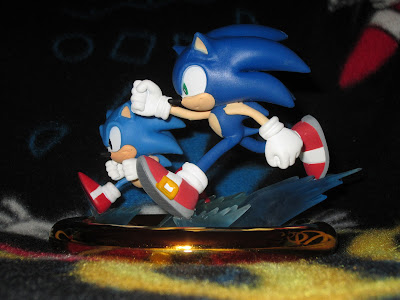 The paint job isn't the best. You're bound to find flaws on the statue. Mine had a bit beneath modern Sonic's arm which went unpainted, a couple of spots on both hedgehogs and modern's right pupil was a little off center. Still, given the size and the fact that it's meant to be placed on a shelf, I don't really notice these imperfections. That isn't to say I let Jazwares off the hook, but overall they look good. The sculpts are great, the base is shiny and I'm not one to go gaga over packaging but the box is really nice. 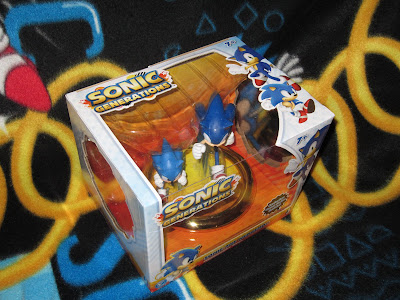 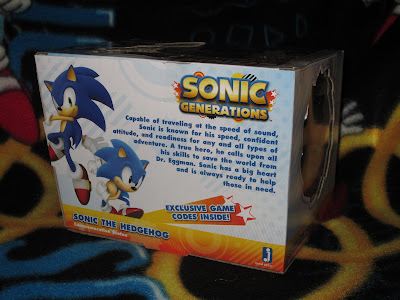 Like past Jazwares boxes, figures can be removed with out damaging the box, so if you want to open it up, look at the figures and place them back in the box you can easily do so. You'll note the "exclusive game codes inside!", these are actually statue codes for Generations secret statue room. All the codes may have been leaked thanks to crafty hackers, but those legitimately collecting codes will find an 8.5x11 sheet of paper inside giving a whopping 14 codes! I won't spoil the virtual statues included, but I will say there are a handful of secondary characters, a few iconic objects and all the enemies that Jazwares previously featured as 3" action figure accessories. 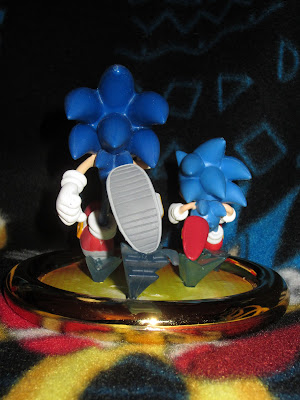 Given the minor flaws and the size, Jazwares Sonic Generations statue isn't a must have but it is the most affordable 20th Anniversary statue out there and offers up unique poses. Plus, it's only the second Generations statue to feature classic Sonic. The statue retails for $24.99 (I'd prefer that the price be below $20) and is slowly hitting stores. It can be found at BigBadToyStore.com for $21.99 and they ship internationally. For a small fee, you can pay for a special service where they play anal retentive collector and find the best looking figure for you, free of most painting flaws. I didn't go for the service, but still got a figure that looks good in my eyes.
Posted by Barry the Nomad