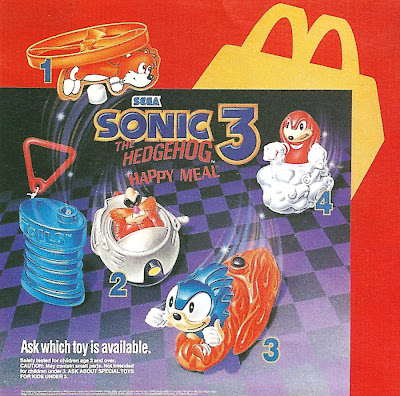 So I found a book lying in the loft about McDonald's Collectibles (this one to be specific) and found a couple pages in there about the Sonic set of toys made in 1994 to promote Sonic the Hedgehog 3, and there is a few interesting bits of info in it along with scans. Above is the American promo art for it and below is the British one. 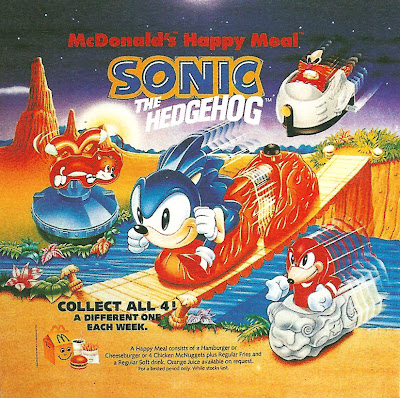 Check after the jump for scans and info taken from the book about all the different international releases and the toy variants. 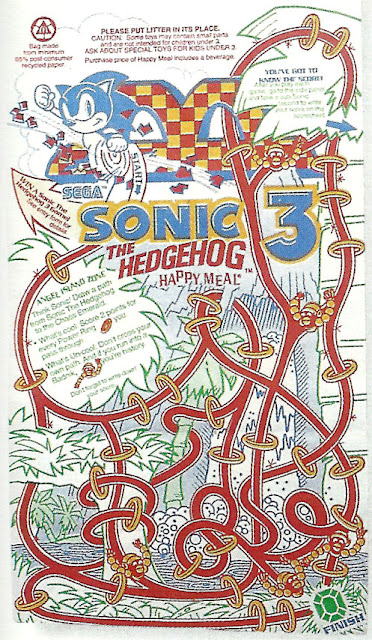 The set first appeared in America between February 4th till March 3rd of 1994, later showing up in Canada and Puerto Rico later that year. The UK got the set from January 27th to February 24th 1995, Germany and Belgium in March, and in June both New Zealand and Japan finally caught up. 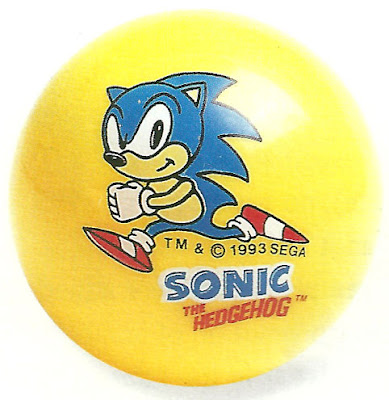 The American set and the European set have some differences. Firstly the US set had a little Sonic ball as an option for younger kids which was only available there. Also the Tails toy was completely different. In America, the toy was in two parts and flew off when you pulled the handle on a string. This version was recalled during the last week of the promotion according to the book due to problems with the pull string.

US Version (left) Euro version (right)
The European Tails toy has the same flat base of Tails himself but the toy itself was changed because they were worried kids would get hurt by a flying lump of plastic. On this one Tails is on base I presume is based on those floaty UFO things from marble Garden zone, and this one has a plastic zip pull thing that when pulled through the little holes makes the Tails (and er...his tails) spin about, but he doesn't fly off the base. 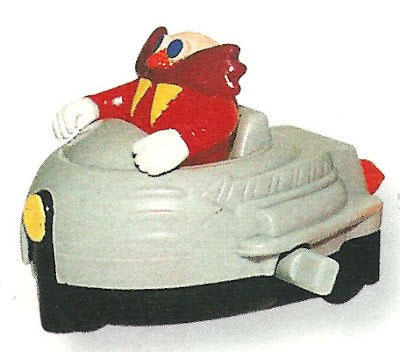 But even more interesting is the Japanese set. They didn't get the tails toy at all, and the Sonic and Knuckles were identical but the Robotnik toy got re-designed to match Japan's original Eggman design as opposed to the Adventures of Sonic cartoon one we got. I haven't seen this variant in particular mentioned or photographed anywhere online though I could be mistaken. EDIT: I was mistaken, there is a photo of it over at the Eggman Empire. If anyone owns this toy we'd love to see some more proper photos of it! Check out this cute artwork of the Eggman toy! 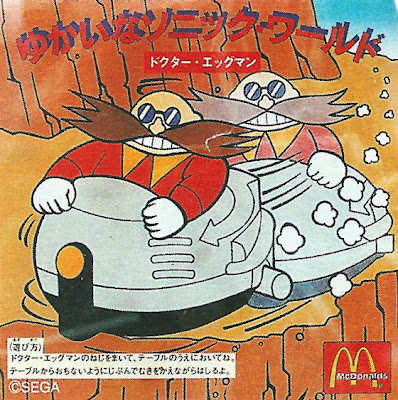 Thanks go to the authors of the book Ray and Ruby Richardson and David and Lesley Irving for these bits of Sonic toy info.
Posted by Animated AF

I have a Sonic MacDonald :)

Awesome find Gagaman! This Happy Meal set was one of my favorite 90's Sonic collectibles. Very interesting seeing that Eggman varient! The only other time I've seen him was in the Sonic 10th Birthday Pack book, and that was a tiny image. The paper insert for the toy is hilarious.

I do recall that maze that they had on the box, if only I kept it! I also remember the box folding into a ramp for Sonic to do a half pipe (unless my memory is wrong).