JSRF Gets Larger Than Life

The world of Jet Set Radio merchandise is a small one. Even the most avid collector could only fill a single shelf with what Sega has to offer. Thankfully a company thought outside the shelf by applying the JSRF license to large-format repositionable wall graphics! 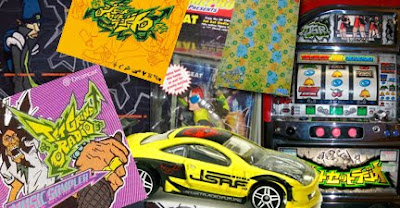 LTL Prints, the company responsible, was founded in late 2008 by by entrepreneurs Kendall Schoenrock and Carsten Petzold. Taken from their own "about" page: "We set out to create a platform for creative expression that would bring larger-than-life repositionable wall graphics to empty walls everywhere," according to LTLprints founder Kendall Schoenrock. "And we are working with the worlds' premier artists, designers, and brands to literally CREATE a new medium." 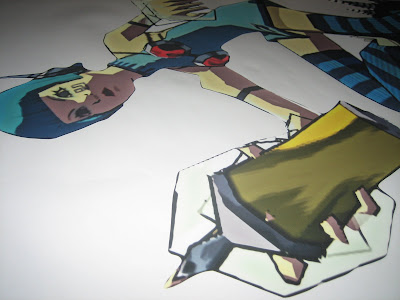 VP of Marketing John Doffing was nice enough to get me in touch with Kendall and Carsten, and I was surprised to find out that both LTL Prints and myself are located within in the same city (Philadelphia)! What more, I was a short ten minute subway ride from their HQ! So taking an extended lunch break, I headed on over to LTL Prints. Once there, I was greeted by Kendall and Carsten and was able to have a look about. The printer they use is enormous, think "the grand piano of printers", while the walls of their office was covered in a variety of images available on their online catalog. 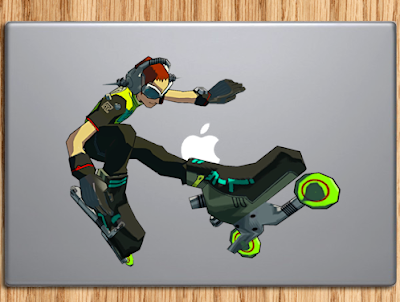 An example from the LTL catalog, laptop sizes go for $14.99
Carsten revealed to me that JSRF was VP of Marketing John Doffling's idea. “we did JSRF as the first video game license for one simple reason: cel-shaded characters look AMAZING as big wall graphics and I personally LOVED this game! I approached SEGA directly to make it happen, and we just launched!" said an enthusiastic Doffling, "I personally am a huge fan and proponent of VIDEO GAME ART, and this new medium is a perfect way to bring this artwork to consumers globally."

Before I left LTL, I asked what other Sega licenses they were considering. Carsten turned the question around and asked what I'd like to see. Of course, any Sega image would look awesome on a wall (with the exception of maybe Silver the Hedgehog), but I limited my requests to Virtua Fighter, Outrun, Space Harrier, HangOn, After Burner, Panzer Dragoon (Saga and Orta), classic Japanese Sonic art and the original Jet Set Radio (which LTL actually has some images of, though they aren't seen in the catalog... yet).

Before leaving, LTL was nice enough to let me choose a JSRF image from their catalog to place on my wall and to share with all of you! Of course, I chose my favorite character Bis (aka Bisu aka Rhyth aka Mew) holding an iconic yellow spray can. Take a look at my hanging process below: 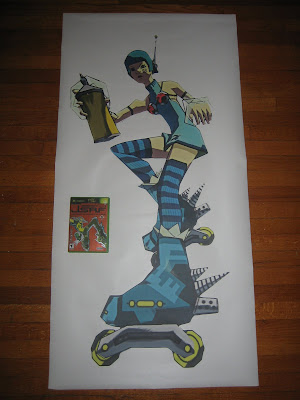 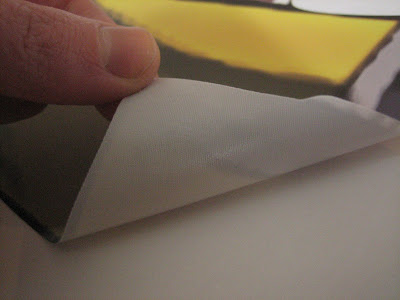 Note that LTL's prints are fabric, not vinyl, so there is no fear of ripping. The adhesive will not damage walls or stick to skin or any other surface in the way that a usual sticker would. 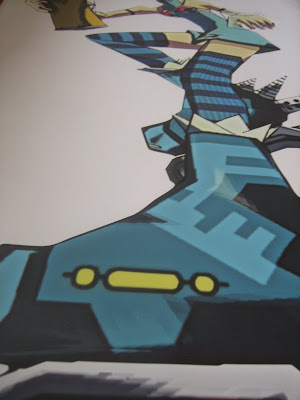 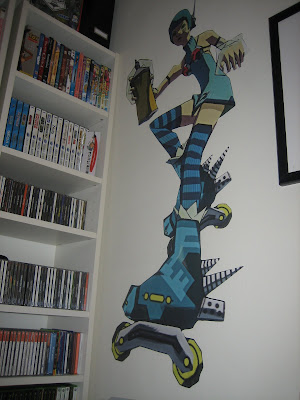 Upon applying Bisu, I discovered that she was crooked and that her arm was going behind the shelf. Thankfully, LTL promises that their prints can be moved 100 times without losing adhesion. So after a few removals and readhesions, Bisu was in place! 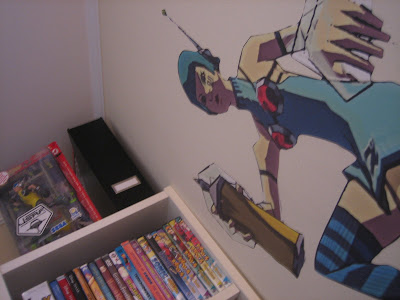 Special thanks to LTL Prints. Head on over to look at their extensive JSRF catalog. Even the electric police fences got their own page!

That's some impressive work there Barry. Great result as well!

Wow, nice bit of genuine journalism there, and you got that sweet print out of it too! Great recommendations to them for other Sega franchises: I would love to have a huge print like this of a Virtua Fighter 1 character specifically, I love that blocky old stuff.

I'm wondering if we should start making Sega Memories/Junkyard shirts... y'know, to look official to get free things ;)

Smindas!! Well, I guess I have to scrap that obituary that I was putting together. How are you, old chap?

Very good, thank you - just quite busy with various things. Although my contributions are a bit lacking, I keep a fairly vigilante eye on the blog ;P

This is awesome! I'm going to reach out to this guy and get some of his stuff!